We Can Have Revival Now!

2nd Chronicles 7:13-15, “If I shut up heaven that there be no rain, or if I command the locusts to devour the land, or if I send pestilence among my people; If my people, which are called by my name, shall humble themselves, and pray, and seek my face, and turn from their wicked ways; then will I hear from heaven, and will forgive their sin, and will heal their land. Now mine eyes shall be open, and mine ears attent unto the prayer that is made in this place.”

I hear radio talk show hosts and like-minded American patriots proclaiming their plans and intentions to restore liberty in our nation. I hear them speaking about arresting key politicians, holding trials and bringing the banking and political criminals to justice. I hear them say that all will be well if we can defeat the Federal Reserve Bankers and take back Congress. I hear all sorts of ideas, plans and groups desiring and working to save America from tyranny and doom.

Albeit, may I say, America cannot be saved apart from repentance toward God. The Bible is not giving us a friendly suggestion in 2nd Chronicles 7:14; but rather, a divine mandate. The same mandate which God placed upon Israel applies to every nation throughout history. Acts 17:30, “And the times of this ignorance God winked at; but now commandeth all men every where to repent.” Without repentance toward God, we are doomed as a nation. God will not bless a nation of idol-worshipping Roman Catholics, who bow to statues of Mary and patron saints. God will not bless a nation of idol-worshippers, who idolize singers on “AMERICAN IDOL.” Sin has its consequences and judgment is coming.

If America is to be salvaged, then the Gospel of the death, burial and resurrection of Jesus Christ must be preached. Any attempt to better mankind without the cross of Jesus Christ is religious humanism (a road to Hell). Ye must be born again (John 3:5). The answer is not reformation, nor rehabilitation, nor education, nor legislation; but rather, regeneration!!! END

“There are a lot of people in church, doubtless, who have denied themselves - self-denial for comfort and convenience. There are a lot of people here who never make any sacrifices for Jesus Christ. They will not suffer any reproaches for Jesus Christ. Paul says, “I love to suffer reproaches for Christ” (e.g., Romans 8:17). The Bible says, “Woe unto you when all men shall speak well of you” (Luke 6:26). “Blessed are you when your enemies persecute you” (Matthew 5). That is one trouble in the churches of God today. They are not willing to suffer reproach for God's sake. It would be a godsend if the Church would suffer persecution today; she hasn't suffered it for hundreds of years. She is growing rich and lagging behind. Going back.”

SOURCE: Evangelist Billy Sunday, from the sermon The Need of Revivals.

The purpose of every New Testament church should be:

BEWARE Of The So Called 'New Fundamentalism'

Why Things Are So Bad These Days

Now here's one of the tragic things about this entire Scripture (i.e., Revelation 12:12), and that is the Devil is wiser than we are. We also know we have but a short time. He knows he has a short time, he gets busy; we know we have a short time, we stay home and watch television... We've got to stay busy for God!”

SOURCE: Pastor Jack Hyles, from the excellent sermon WHEN SATAN IS AT HIS WORST.

Titus 1:3, “But hath in due times manifested his word through preaching,
which is committed unto me according to the commandment of God our Saviour.”

“I love sports. ... Occasionally I have a few heroes and one of my heroes is Jim Ryun, the miler. I pulled for him to in for 4 years to win the Olympic mile race. To me it was the highlight of the Olympics. It was the only thing in the Olympics I had to watch. ... I wanted to watch him (Jim Ryun) win. And you recall how that in the preliminary race, the trial run, Jim Ryun should have won the race hands down. But he tripped over a fella, and fell. I'll never forget it. I was watching. He fell over a runner, and fell to the center. He was groggy for awhile, he got up. He'd worked 4 years, running miles and miles a day, dedicated to one goal, one goal, one goal... get that Olympic medal.

And now everything has stumbled and fallen on the cinders of a track. He's yards behind, no way to catch up, he's half a lap behind, What did he do? Anybody else would have got up and just walked to the side. He got up, 200 or 300 yards behind, and kept on going. He kept on going. He came in last, but didn't quit. He didn't quit. He crossed the finish line. And I thought, there is the greatest miler that's ever run a mile in this world's history. There's a man who'll run a mile faster than any man in history coming in a miserable last, but he didn't quit. You may not can win, but you can finish.”

SOURCE: Pastor Jack Hyles, from the excellent sermon WHEN SATAN IS AT HIS WORST.

Freedom Is Not Free!

I haven't written many poems in my life, but here is one from my heart. I penned the following words today just before getting caught in a major rain down-pour. I grasped the poem firm in the palm of my hand to keep it from getting wet, while the rest of my body was drenched. After about 10-minutes the storm cloud passed by and the sun returned. I love being in the rain. Anyway, I thought and penned the following words concerning war... 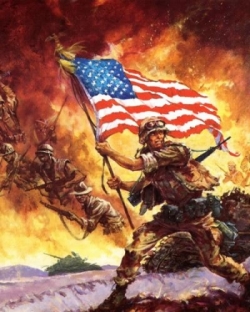 E'er more of America's sons are sent to foreign soil
to lay down their precious lives for corporate oil.
Whereas America's sovereignty succumbs to its open border,
American troops perish for the New World Order.

Money for this, money for that,
never a dry well it seems,
at the expense of American citizens who've lost their dreams.

Come one, come all, see the big show tonight;
while Americans live in fright;
Not of foreign enemies so big and bad,
but of our government so corrupt and sad.

We hear “get the terrorists, get them as fast as you can,”
while indefinite detention of U.S. citizens is their plan;
And if from this nightmare we one day awake,
'twill be to the reality that all was at stake.

Are Natural Disasters God's Judgment Upon America for Sin?

Ye Worship Ye Know Not What

“There can be no great soul-winning churches, no revival, without the power of the Holy Spirit. Zechariah 4:6 states, 'Not by might, nor by power, but by my spirit, saith the Lord of hosts.'” —Dr. Curtis Hutson

“And it came to pass, that when all our enemies heard thereof, and all the heathen that were about us saw these things, they were much cast down in their own eyes: for they perceived that this work was wrought of our God.” —Nehemiah 6:16

There Ain't Nothin Better Than Jesus (by Pastor Danny Castle)

The Sevenfold Sin of Those Who Do Not Win Souls (video by Dr. John R. Rice)

The Imputed Righteousness Of Jesus Christ